I like pi. #geekme
It wasn’t my Apple Watch or my iPhone that’s peaked my tech senses lately, it’s my Raspberry Pi.
No bigger than a pack of cigarettes is this full-blown computer. 4GB of ram, Bluetooth, WiFi, Ethernet, HDMI.

You download an OS (operating system, similar to Windows) onto an SD card (memory card), then boot it up like any other computer. Yes, this is Linux, a little crude, but free.

There are a bunch of different variations of Linux including Raspberry’s own OS. The cool thing about it is you can download two or three OS’s onto different SD cards and play around with them just to experiment.
I have a Pi set up as a NAS (network area storage). My PiNAS has an external hard drive connected to it and is shared across my network, I use it as a collect-all dumping spot, my own personal dropbox, anyone can access it to store pictures, documents, downloaded software, etc. It’s small, I can take it on vacation and at the end of the day everyone can upload their favorite pictures they’ve taken to the PiNAS when we get back to the motel room.
This is just one use. My other idea I’ve been playing around with is to set up a remote control menu board for a restaurant, images would be uploaded or updated to the menu board over the internet. Yes, Wendy’s and others are already doing this, and there are also a lot of “paid for” solutions out there too, but where’s the fun in that?! 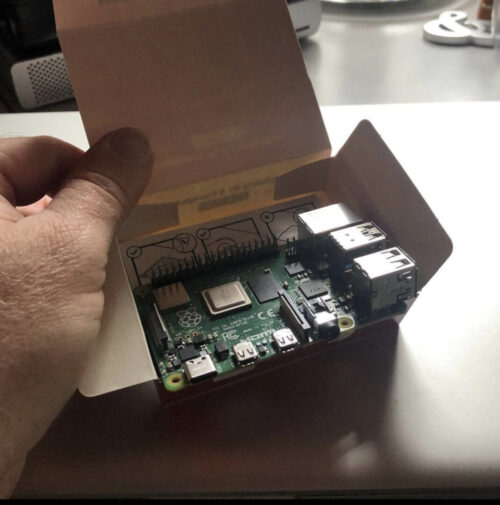 If you need to setup a computer in a public place, here ya go. Mount the Pi to the back of a TV, plug in a wireless mouse and wireless keyboard and there you go, one inexpensive internet portal or kiosk ready to go! So many uses, so little time. 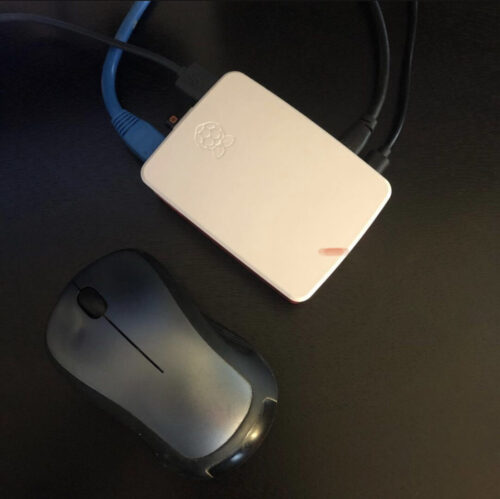 TECHRev: Technology applied to the book of Revelations in the Bible.
If you listen closely you can hear the footsteps of the Messiah walking through the clouds of heaven on the pages of God’s prophecy. -John Hagee
The King is coming!
Irony? I was searching for an image of the Terminator for this post, I found one alright… for the Terminator movie SALVATION.
I have come across some tech info I find amazing and have summarized it here.

Imagine Siri on steroids.
In the very near future, or it may have already been deployed or… created, Google “Deep Mind” or a competing company, creates “Strong AI” (artificial intelligence), a living being, on the Internet the www, self-aware and self-learning, it will have access to and know everything. Daniel 7:4. The catch? Once created… humans will not have control of it, you will not be able to turn it off.
Strong AI, look for a logo, a Lion with the Wings of an Eagle to fulfill bible prophecy. Daniel 7:4
p.s. I’m finding out that the news about Google’s “Deep Mind” project is a few years old, they probably have this AI being alive now. Read also “Scary Smart” by Google’s Cheif Business Officer Mo Gawdat

Google and Deep Mind, it gets really interesting about halfway.
https://vm.tiktok.com/TTPdSB5fUx/

Watch for this logo, lion with eagle wings.
https://vm.tiktok.com/TTPdSBU139/

3D printing – Have you seen what they’re doing with 3D printers? This tech has been around for awhile and now for around $200 you can buy a printer, a whole 3d printer and download a model and print a 3D object.
Child’s play, they are now making body parts!
Deep Mind will design for itself an android body to inhabit so that it can walk among us, this enables him to walk into the temple in Jerusalem where he declares himself God.
Daniel 7:4 …made to stand on two feet like man; a human mind was also given it. KJV reads heart, NASB reads mind. Brought to life.

“Android” will then demand that we worship it and have its mark to buy or sell.
KJV reads a mark IN your hand as in a cell phone. Other translations read a mark ON the right hand or forehead. Revelations 13:16,17

Is this not wild?! The ultimate tech, to create man in our image? The technology is here!
Scary huh.

John 16:33
These things I have spoken to you, that in Me you may have peace. In the world you will have tribulation; but be of good cheer, I have overcome the world.”

Revelations 1:17, 18, 19
17 And when I saw him, I fell at his feet as dead. And he laid his right hand upon me, saying unto me, Fear not; I am the first and the last: 18 I am he that liveth, and was dead; and, behold, I am alive for evermore, Amen; and have the keys of hell and of death. 19 Write the things which thou hast seen, and the things which are, and the things which shall be hereafter;

Are you ready? To me these are exciting times we live in, if Jesus returned tomorrow would you go with him to heaven or be left behind her on earth. Bible prophecy has been proven over and over again that his word is true and faithful.

Call on his name, accept him as your Savior so you can spend eternity in Heaven with Jesus.

Romans 10:13 For “whoever calls on the name of the Lord shall be saved.”

The King is coming!

II Peter 3:13 NKJV
Nevertheless we, according to His promise, look for new heavens and a new earth in which righteousness dwells.

Wireless is a convenience.
There I said it again, and yes it is really fast nowadays, but it is also subject to outside interference is less secure and with a lot of devices there is a potential for data to get bogged down and start dragging, so for moving data such as 4K video for movies, a hardwired connection is 100,000 times faster, secure and very reliable. But for most people wireless will work great and it is fantastic!
For others (me: ) with a home office a hard line (data cable) is the preferred connection, wireless is for cell phones and tablets IMHO LOL.
To connect your desktop computer, you would plug a network cable (RJ45) from the computer into your router.
The same with your new Smart TV, it has a hole (RJ45 jack) on the back of the TV to plug in a network cable, do it, hook it up, if you’re going to be streaming 4K or 8K (extremely high definition) movies in Netflix on your new 75” TV, you don’t want any interruptions, you’re going to want a hardwired connection just like cable provided, to provide an uninterrupted flow of data into your TV. 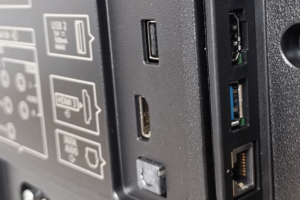 Data ports on back of TV

Here are some pictures above of my small home (office) network. I have everything mounted on the wall, tucked away out of sight, running in the background, and thanks to ACE Fiber it’s very stable. You only have four ports on the back of most routers to plug devices into, so I had to add a “switch”, which is just another box to plug more devices into. I had one, ran out of ports again, and had to add another.
This is a simple hub and spoke network design. Imagine if you will a bicycle wheel, the hub, the center is the switch, and the spokes are the network cables going out to your devices or printers. My “server” has a few external hard drives for extra storage plugged into it with “sharing” enabled so I can keep all of my files in one place… with a triple backup. I also have my laser printer plugged into the server and I found an app that makes the printer available to everyone on the network, you can print from your computer, laptop, tablet, or phone. I have an old Mac Mini I’m using as a “server” but another option is to add a NAS storage device, which is just another box with hard drives in it for storage. Network Area Storage or something like that. I’ve also added battery backups to a few critical devices. I have my ACE router plugged into a battery backup so if the power flashes the WIFI is uninterrupted, and there you have it, one small home-office gigabit network.
I had already installed fiber to my internet tower for wireless broadband, so technically I was the first in Glen to install a fiber network lol, but ACE Fiber completes me and my network.

OK so it’s been over a year since Fiber arrived. Wow.
Has this effected your life? Me? Greatly, especially the way we watch tv now. I did away with my DirecTV account, (why don’t they come get the dish off your house?) I’ve been paying $140 a month with only 1 “extra” package, 2 receivers, etc. $140 a month to watch TV plus $60 a month for pretty good internet service out here in Glen.
I had already downloaded a few tv apps like the Disney+ app and the Paramount app and others, but what I discovered is… you will be expecting or looking for is that same “cable TV” or DirecTV experience, and the closet thing I’ve found to that is with the app Hulu Live, it’s like having cable tv again. The Paramount app (used to be CBS) is a great app with a Live tv button, and I wish ABC and NBC would follow suit, but NBC or ABC apps do not offer Live TV. Now with the Hulu app I can watch them all! Live! We like WMC TV Action News 5 Nightly with Pat and Vanna afterwards on da Wheel of Fortune. I was able to delete all of the other apps that had accumulated, AMC, Discovery, FX and just use Hulu, I also use Hulu as my TV provider for apps that require one like ESPN, but everything is on Hulu anyway. $70 per month, $7 per mo for Disney+. I’m down to almost one third the cost I was paying to watch tv including fiber optic internet.

P.S. If you have a smart TV and don’t really watch that much TV, your TV comes pre-loaded with apps already, there are a lot of “free tv” apps, they show a lot of old tv series with a lot of commercials, and is it me or are there more commercials watching TV online using these apps?

P.S.S. Don’t forget to delete your info (billing) before you delete any app, you may delete it off your tv but they keep billing you unless you specifically cancel.

UPDATE: I re-configured my HULU package again for even more off of the price. Hulu Live, Disney+, ESPN+

Re-occurring flashback…
Someone long ago when cable TV came out said to me, “I’m not paying anything to watch TV”.

Below is a short list of the steps required to setup a website. Most of this setup work is referred to as setting up the “back-end,” a lot of behind the scenes work goes into creating a website before you can even start designing the website. Domain name choices, hosting choices and choosing a designer to build your website, or are you going to tackle it yourself.

– What is a website?
Your home on the www – to me it’s best described as an electronic brochure, an ebrochure, usually designed with Wordpress a publishing platform that is extensible. 3rd party plug-ins (addons) let you setup contact forms, or a store and sell your products.

– Now you are ready to design your pages
Content is king.
Do you have a brand?
Requirements? Good pictures and well-written text.
Selling online requires professional product photography.
or
Contact me HERE and let me handle all of the details for you.
I can bring more value to your company.

I’ve added a blog to my website. #geekme Woohoo! IKR

If you know me it will be mostly Tech stuff, like the graphic above I used to use all the time when terminating data cables.